Subject to the receipt of final regulatory approvals and satisfaction of customary closing conditions, the conversion is expected to close on or about January 29, 2015. The shares of common stock sold in the offering are expected to begin trading on the NASDAQ Capital Market on or about January 30, 2015 under the trading symbol “FNWB.”  Investors should note that the trading symbol has changed from the proposed symbol contained in the prospectus.

The offering was oversubscribed by eligible depositors of First Federal as of March 31, 2011, who had a first category priority in the subscription offering.  Accordingly, these subscribers will have valid orders filled in accordance with the allocation procedures set forth in the Plan and as described in the prospectus.  If you are a first category subscriber and would like to confirm your allocation, allocation information will be available by contacting the stock information center at (844) 731-2610.  The stock information center will be open for this purpose from 10:00 a.m. until 4:00 p.m., Pacific Time, beginning on January 29, 2015.  No other orders placed in the subscription and community offering will be filled and subscribers will have their funds returned with interest promptly upon closing of the conversion.

Larry Hueth, President and Chief Executive Officer of First Federal, stated:  “The Board of Directors and all of the employees of First Federal appreciate the strong support of First Federal by our customers and the community.  We look forward to continuing to serve our communities as an even stronger community bank.  In addition, the First Federal Community Foundation with receive a contribution in cash and stock of over $9.7 million, which will be used to provide charitable support to our communities.” 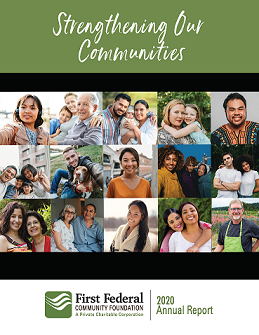